Every army in Flames of War should have two objectives to fight over.  Typically I've seen supply dumps, bunkers, and burnt out tanks, but I figured there's enough history around to try and bring some to the table.  I found two great historical photos on Piotr Jaroszczak's excellent SBSK site and got to work. 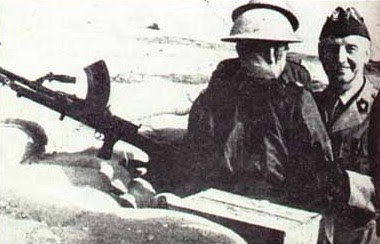 This picture finds General Wladysław Sikorski, Prime Minister of the Polish Government in Exile and Commander-in-Chief of the Polish Military in a Tobruk gun pit.  According to the Australian newspaper The Courier Mail:

GENERAL SIKORSKI AT TOBRUK FRONT LINE - CAIRO, November 17. - Polish forces at Tobruk Have been inspected by the Commander-in-Chief of the Polish Army (General Sikorski). He said their ferocity and devotion to duty had deeply impressed him. His troops held the British and Australian forces in the highest respect and would fight with them anywhere. General Sikorski decorated men who took part in recent successful raids, and he accompanied a night patrol to within 400 yards of the enemy line.

What a mensch... running around on night patrols within rifle range only days before the Operation Crusader breakout.  You, Sir, clearly deserve your own objective marker. 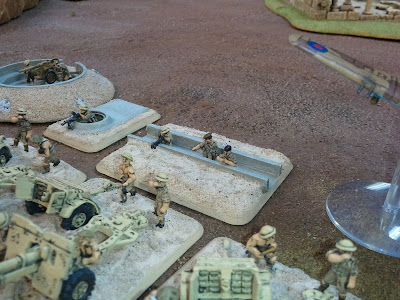 I've depicted the scene above with the General in a trench line with the Bren gunner and an officer pointing out some sort of item of critical importance.  Maybe it's a Panzer IV, or a really cool lizard, or an Aussie eating a really cool lizard.  Whatever it is, the Bren gunner has been looking at it for weeks and can't help himself but look over at General Sikorski instead.  It was a tough choice whether to model Sikorski wearing an iconic four-cornered rogatywka hat or the soft cap in the photo.  For whatever reason, the historic photo beat out the artistic license this time.  I recently found a photo of the General walking around with a gaggle of rogatywka-ed aides that make me want to do another head swap on that officer, though.  Or maybe just green stuff the corners...  But then I realize I have a lot of other crap to paint.

General Sikorski would die in a plane crash in 1943 sixteen seconds after takeoff.  Conspiracy theories abound and many Poles think he was killed by Soviet agents. 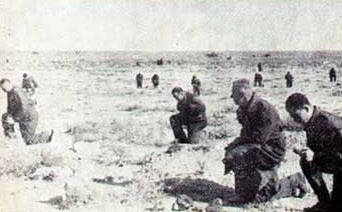 Poland's a pretty Catholic place.  These men celebrating mass are about to fight in the Battle of Gazala and are spread out all over the desert so one lucky artillery shell doesn't take them all out. 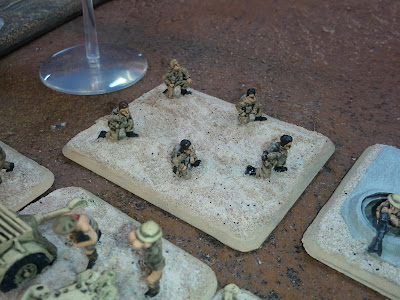 After a little hacking and filing, I was able to recreate them using some British heavy mortar crews.  I found that spetznaz heads in soft caps need the least amount of filing to get to a bare head.  It would've been nice to keep the whole shorts thing going, but as you can see in the photos, even the desert isn't shorts weather in November/December when you're living and fighting outdoors.  I'd like to add some helmets on the ground to really complete this, and AJ suggested a bible which would be sweet.  Finally, both of these objectives have really highlighted my lack of skill in basing terrain.  When I figure out how to recreate the scrub and rocks in the photo, I'll use the same scheme on the rest of the army.

This completes the SBSK series for now.  When I get back around to it, I'll be adding more Matlidas for a fun mid war horde, some more carriers in caunter, and that last infantry platoon that mocks me from its popsicle sticks.  Battlefront was also kind enough to come out with some Bofors 37mm Portees this week, and since those are the only Polish portees I've actually seen a picture of, I should paint a few up.

The next force you'll likely see up on this blog are the SBSK's Italian foes, but painting all of their motorcycles has been brutal.
Posted by crak at 1/13/2012 08:49:00 AM